The middle-market model has fallen victim to its own success in some ways over the last few years. As investing in small, growing companies has proven lucrative, more and more players have entered the fray. These days, mid-market private equity firms face competition from bulge bracket PE firms heading downstream, large corporations looking to accelerate growth, fundless sponsors doing one-off deals and family wealth offices bypassing PE firms to invest directly. Fundraising has been robust, which means there’s a lot of money chasing the best deals. That, in turn, has driven up prices. To prevail, many PE firms are re-calibrating their approaches, often by lowering expectations for returns, lengthening hold times and accelerating the closing process.

“We’ve really had to adjust how we run our models if we’re in those situations where we know that it’s a very high-quality asset and it’s in a competitive process,” explains Kelly Cornelis, a partner at LaSalle Capital, a Chicago-based middle-market PE firm. The most attractive companies–those with double-digit growth, lots of upside and low customer concentration–are commanding very high valuations.

In addition to the high valuations for the attractive targets, sellers are benefiting from more favorable terms: more cash at closings, smaller seller’s escrows, faster closings, and more two-step auctions, where potential buyers compete to be named to a short list of bidders.

“There is pressure to be able to close quickly,” Cornelis says. “You’ve got to be ready to go; you’ve got to have all of your service providers lined up, and they have to be pushed to get things done quickly. It is a challenge. We try to do as much diligence as we can, pre letter-of-intent, so that we’re ready to go, and we can make that happen without sacrificing our diligence.”

New normal
Middle-market dealmakers and advisers say the high valuations, paired with record-high debt ratios, reflect an abundance of both capital raised from PE investors and debt supplied by non-bank lenders. PE firms are adapting their strategies to compete for targets, focus on growth for their portfolio companies and reorient their investors’ expectations. Recent stock market volatility aside, many of the factors driving the high valuations–such as dry powder from new PE investors and recycled PE exits, active lenders, non-PE competitors for deals, transformations of large corporations and historically low interest rates–show few signs of slowing down. 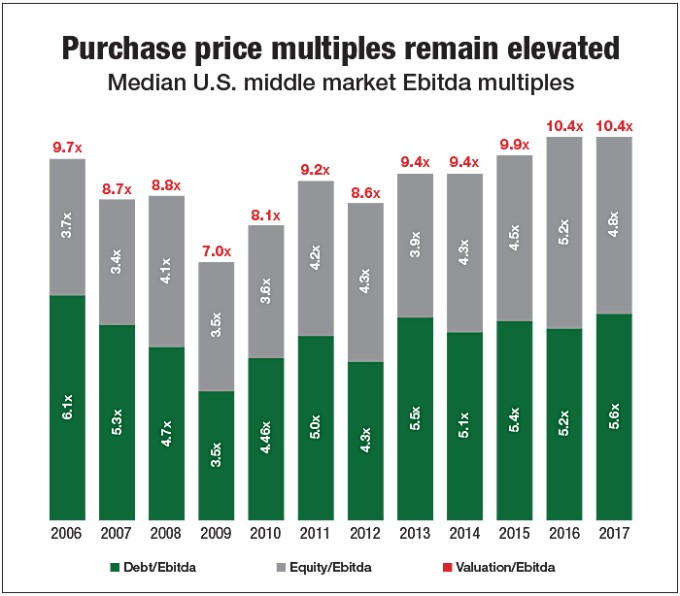 “We’ve seen price expansion; I think people are sort of used to it right now,” Mitchell says. “What private equity firms would have said to me nine months ago was: ‘Gosh, I can’t believe these prices; we’re just not willing to pay.’ Now these same firms are saying to me: ‘Well, we have to pay, or we’re not going to be in business. But it’s okay, because I’m selling a portfolio company, and I’m getting that kind of pricing too.'”

Expect the high middle market deal valuations to continue through 2018, says Peter Lehrman, CEO of Axial, an M&A deal network based in New York. Corporate tax breaks, repatriation of tax revenues to the U.S. from other counties, low interest rates, a strong stock market and accelerating changes in nearly every industry due to technology will all continue to drive mergers and acquisitions activity, Lehrman says.

Plus, the average tenure of companies in the S&P 500 is as short as it has ever been, which shows that a lot of large companies are in danger of becoming irrelevant if they don’t make transformational acquisitions of smaller businesses, he says. “They need to be very active in terms of thinking how do they defend their positions over the next five to 10 years.”

Another factor driving the high middle-market valuations is the number of new, or newly interested, buyers that have the capital and ability to do deals, including family offices making direct purchases, Cornelis says.

“That is certainly having an impact,” she says. “If we do lose out on an opportunity and we find out who (the buyer) was, it’s usually somebody we’ve never heard of, because there’s so many different types of buyers out there. You’re kind of getting it from all sides.”

Also, family offices, because they can afford to take a longer time horizon on their investments than the three- to five-year target of a PE firm, are willing to pay more, which gives them a boost in the current environment, Mitchell says.

“The family office continues to put real pressure on the private equity firms, because they are set up to buy companies that often have a lower hurdle, in terms of what they want as a return,” she says. “If you hold a company 10 years, (a) 12 percent (annual) return is not bad.”

Short of a stock market crash or a drastic reduction in interest rates, Mitchell says, she doesn’t see the high valuations coming down.

“Intuitively, you would have said, gee, something’s got to happen, this is untenable; there’s not enough supply,” Mitchell says. “But deals are getting done; they’re getting done at very high multiples; there are multiple bidders for deals; and at the same time, private equity firms are able to turn around and sell in this market, so you’re seeing a lot of flips between PE firms.”

Tail wags dog
While the massive volume of investor capital in the middle market space is helping to pump up valuations, the main driver is the debt supplied by non-bank lenders, says Andrew Greenberg, CEO of GF Data and senior adviser at TM Capital, an investment bank in New York.

For PE-sponsored deals valued between $10 million and $250 million–the universe covered by GF Data– average valuations have risen to 7.4 times Ebitda, the highest since the data firm started tracking deals in 2003. The average amount of debt for those deals has also climbed to an all-time high, at 4.6 times Ebitda, according to GF Data.

The valuations and debt levels are highest for the largest deals that GF Data tracks–those in the $100 million to $250 million range. Those valuations coincide with the area of peak interest from the non-bank lenders, Greenberg says.

Middle-market deal numbers tracked by PitchBook, covering U.S.-based companies acquired through buyout transactions between $25 million and $1 billion, show median valuations of 10.4 times Ebitda –the highest in at least 10 years–and median debt for those deals at a decade-high 5.6 times Ebitda.

In the aftermath of the financial downturn, non-bank lenders have taken over middle market M&A because they have been better able to amass capital, develop products and assemble talent suited to cash-flow-based lending, Greenberg says. Commercial banks as a group have lost their appetite for cash-flow-based leveraged finance. The surge in debt available for deals is the manifestation of that shift.

“My view is the main reason why non-bank lenders have gained a center of gravity over bank lenders is not regulatory; it’s cultural,” Greenberg says. “Cash-flow-based lending is a business based on gut and feel.”

In today’s market, it is normal for an investment banker selling a middle market business to talk to a handful of lenders early on in the process to get their view of the property, Greenberg says. The opinion of the lenders about how much debt a deal for the business could carry becomes part of banker’s discussions with financial buyers, and then the buyer’s discussions with the lender community.

“In this market, if the lenders are saying they can see total debt of 5 times (Ebitda) on a business, with equity being 40 percent to 50 percent, that tells the buyers that the bidding for that business among financial buyers is likely to start at 9 to 10 times (Ebitda),” Greenberg says. “Prospective buyers will often make judgments about whether or not to participate in a process based on what they’re hearing from lenders, rather than from the company being offered for sale, and its investment banker.”

The tremendous interest in middle market M&A from institutional investors, the surplus in dry powder for doing deals and the resulting supply-demand imbalance is forcing PE firms to rely on their “bring your own growth” tools, says Chris Cathcart, a partner at Halifax Group, a middle market PE firm in Washington, D.C.

“If your strategy is to buy businesses for 6 times (Ebitda) and sell them for 8, and put your feet up on the desk, then your strategy is not going to be very successful in this market,” Cathcart says. “I think it’s more likely you’re going to have to pay 8 times (Ebitda) for something you’d prefer to pay 6, and you’d better have the convictions and the strategy in place to bring your own growth after building a platform and implementing the appropriate tools to achieve your returns that way.”

For Halifax, the growth tools include cross-border M&A, in addition to seeking out organic growth opportunities, adding new products and services, and acquiring related businesses in new markets.

LP considerations
While a PE firm can’t sit on its investors’ capital once it has raised a fund, it can’t rush into an investment just to get the money out, and the fund’s limited partners likely aren’t clamoring for hasty investment decisions, says J. Neely, a managing director for M&A at Accenture Strategy consultants based in Cleveland.

“Patience is rewarded,” Neely says. “I don’t think there’s an LP out there that would want a fund to go get capital invested just for the sake of it.”

LPs have adjusted their expectations as valuations have climbed, says Cornelis, whose firm is preparing to raise a fund. More investors are also seeking direct co-investments with PE firms to help increase their returns.

Investors aren’t asking their PE fund managers to put their money to work in unnatural or unhealthy ways, Cathcart says. “Pressuring money to go to work just for the sake of putting it to work is, in the long run, probably not a great recipe for good returns.”

“What’s so interesting about the middle market and the lower middle market is that you’re still able to apply some of these tools and tactics to bring growth to businesses, to help a management team build a platform together and then grow the business in a way that maybe is not available for already very large, highly professionalized, finely tuned companies,” Cathcart says.

The fact that some PE firms are raising capital, and raising it fairly easily, for individual deals outside of their pooled funds shows that “there’s a huge amount of shadow capital or dark capital sitting on the sidelines,” says Lehrman of Axial. “It’s not just the capital going into these funds, but it’s all these co-investment demands on a deal-by-deal basis.” Lehrman says he knows of two PE firms raising $100 million and $550 million, respectively, for one-off private equity deals.

As valuations are driven higher and higher, middle market PE return margins have been squeezed. Where a private equity firm could once tout returns for its limited partners that outperformed publicly traded stocks by 5 percentage points annually over time, now outperforming stocks by 3 percentage points is viewed by the general partner as a victory, says Greenberg of GF Data.

Greenberg says the high valuations and high debt ratios for middle market deals are unsustainable, and he readily admits that he’s been voicing that opinion for 18 months, as both figures have continued to climb. The market has accepted a leaner spread between public equities and private equities valuations, but “there’s no room for private equity returns to continue to be compressed,” he says.

Even still, he says, “it’s certainly my impression that the M&A market will remain strong for the balance of 2018.”