GOLD SHEETS Middle Market — M&A activity in the middle market showed a meaningful pickup in 2Q10 as both deal volume and purchase price multiples expanded compared to 1Q10. According to data collected by GF Data Resources, the average purchase price multiple increased to 5.6 times in 2Q10, up from 5.2 times in both 1Q10 and 2H09.

According to Greenberg, sponsors are Senior Debt Sub Debt Equity willing to pay a premium for better per100% forming businesses.

In 2Q10, above-average financial performers were valued at 107% the valuation of lesser-performers, the highest premium in any quarter tracked by GFDR in the past four years. The size of the businesses sold was also an important driver this past quarter.

“It was not lost on buyers and lenders that smaller businesses experienced greater difficulty following the financial crisis and have had a harder time gaining visibility coming out of it,” says Greenberg. “Banks are in no hurry to expand the level of cash flow lending to businesses with less than $5M of EBITDA.”

“While the debt markets have improved relative to last year, deals completed in 2Q10 continue to reflect the continued cautious use of leverage for smaller issuers,” says Greenberg. “However, in 2H10, we would expect to see the trend reverse; a more pronounced jump in senior and total leverage is expected which would pull down the equity percentage.”

The climb in transaction multiples seen this past quarter is expected to continue into 2H10 and 2011.

“As the economy, the capital markets and individual companies continue to recover, we should see a continued expansion in purchase price multiples and deal volume,” says Greenberg. “We are still in the early stages of a recovery for the M&A market and there are a lot of companies waiting for a more sustainable improvement in financial performance before selling. If the M&A market continues on its current path of slow and steady recovery, there will be plenty of inventory on the market next year.” 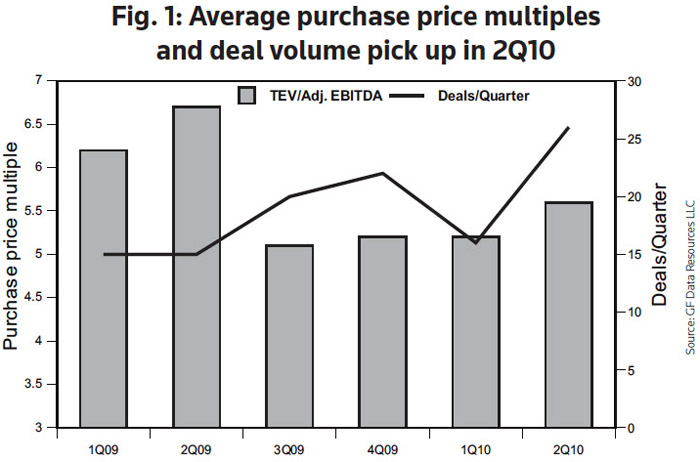 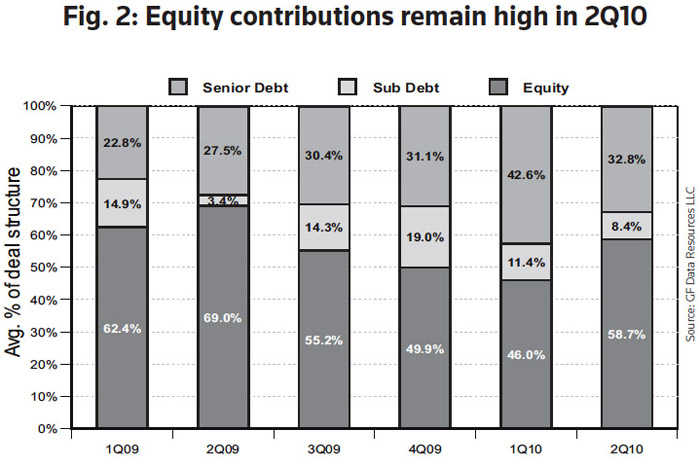