The M&A market for middle market private equity backed deals continues to heat up as both deal volume and purchase price multiples expanded in 3Q10. Based on deals submitted to GF Data Resources from over 150 private equity firms, average purchase price multiples jumped to 6 times in 3Q10, up from 5.5 and 5.2 times in 2Q10 and 1Q10 respectively (Fig. 1).
“Multiples are clearly warming up, especially for high-quality businesses,” says Andrew T. Greenberg, GF Data’s chief executive offi cer. Size continues to play a major role in the multiples that businesses are able to achieve. The average multiple in 3Q10 for deals with an enterprise value of $10-$25 million was only 5.1 times, meaningfully lower than the 6.1 times for deals with a $25-$50 million purchase price and 6.6 times for deals with a $50-$100 million purchase price. 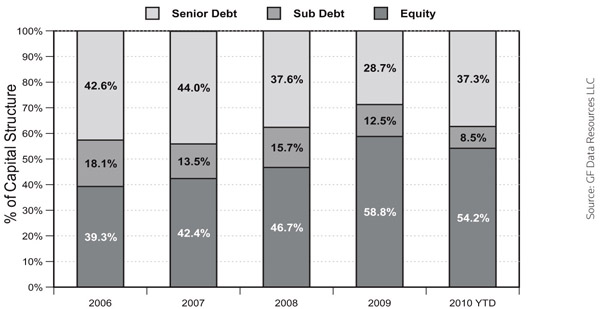 Data from GFDR for 3Q10 shows that sponsors are becoming more comfortable purchasing lesser performers. In the fi rst two quarters of 2009, 64 percent of completed deals were for high performers, but in 3Q10, only 43 percent of volume represented fi nancial standouts.

“Sponsors are becoming a little less discriminating in their choice of targets given the pressures on them to invest funds,” says Greenberg. “There are more B and B+ properties on the market now and sponsors are willing to pay a little more for them.”

But in 3Q10, the “quality premium” became more apparent than ever. According to Greenberg, “we typically see a 7-10 percent premium on average for better performers, but this past quarter the quality premium was 11 percent, the highest we have seen since we fi rst started tracking the data back in 2003.”

Not only are sponsors paying more for businesses this past quarter, they also continue to put in a substantial amount of equity. The average equity contribution on a year to date basis remains elevated at 54.2 percent. While this is lower than the 58.8 percent average in 2009, it is still well above the average equity contribution seen in 2008 and 2007 of 46.7 percent and 42.4 percent respectively (Fig. 2). “The importance of getting deals done by year end is apparent as many sponsors are overequitizing these smaller deals,” says Greenberg. “We found it very interesting this past quarter to see so many under-leveraged deals.”

According to GFDR, there were many deals submitted where senior debt was the same as total debt, which implies many sponsors would rather just put in more equity and do without mezzanine capital. This is apparent in the data; so far in 2010, subordinated debt only comprises 8.5 percent of the capital structure compared to 12.5 percent last year and 15.7 percent in 2008. Senior debt lending has improved relative to last year, making up 37.3 percent of the capital structure compared to only 28.7 percent in 2009. But it is still not making up the same levels of deal structures that it was pre-crisis.

“The rebound in cash fl ow lending that can be seen in the broadly syndicated loan market is also evident in the middle market but to a much smaller extent,” says Greenberg. GFDR indicates that those deals with an EV of $25-$100 million have been quite active for commercial lenders. “Those businesses are large enough that performance has been able to rebound, but they are small enough that they are able to obtain fi nancing on a single-bank basis,” says Greenberg.

While the borrowing market is more robust for issuers with EBITDA greater than $10 million compared to last year, obtaining lower middle market fi nancing continues to remain a huge challenge and issue.

“For those issuers with EBITDA between $5 million and $10 million, cash fl ow-based fi nancing is available, but it’s a gray area, with the extent of leverage depending on deal quality, industry, sponsor reputation and a host of other factors,” Greenberg says. “But fi nancing for issuers with EBITDA of $5 millioin and less continues to remain rocky territory for lenders.”

So what can we expect in 4Q10 and 2011? Greenberg believes 4Q10 M&A volume will tick up and purchase price multiples will continue to expand but at a slow steady pace.

“Many expected a bulge in activity at the end of the year due to the scheduled federal tax cut expiration, but our sense is that volume is getting smoothed out as many businesses were late to the game or were reluctant to time the market,” Greenberg says. “It seems many business owners are slowly getting comfortable with the idea of selling so we should see M&A continue into 2011.”